Somewhere  in Rusty's short life he suffered a fractured  coccidial bone in his back.
This permanent injury severed almost all of the nerves in his spine that control bowel and urinary control.

He did have about 75% of his urinary function but zero control of his bowels. 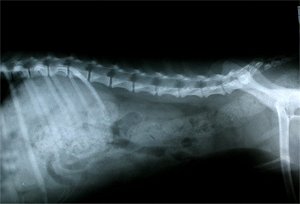 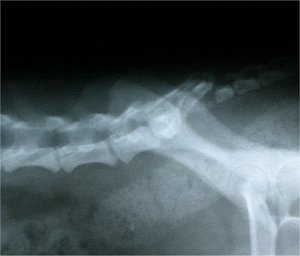 There was just enough nerve activity to pose an almost constant tingling, burning sensation that radiated towards his rear end.
This kept Rusty in a heightened state where he had to be constantly chewing things like Nylabones and various electrical cords with great vigor to try and relieve his tension.  A variety of aggressive medications proved only to be of slight relief and not in his best interest to use long term.

Having no control of his bowels, the constant odor and the wearing of a diaper trapping the problem
always kept him in a very distressed mode.  Even our own dogs didn't want to be near the smell.
Not to mention the added burden of wearing a belly band 24/7 while inside.

While he was in the shelter for almost a month if they had learned of his condition he would have been PTS immediately.
After pulling him from the shelter we learned of his injury the first week after a trip to the vet who all but came out and said to end it.
We wanted to try everything possible to see if we could save this sweet young dog's life.

Sadly, reality made it clear to us it was not to be.

We opened our hearts and home for him to experience love and security.  He got to visit Santa at Petsmart and spend Christmas with us and our two Min Pins Jinx and Jack.  He enjoyed toys, running, playing, jumping as best as he could to keep his mind off his condition.

We had to pick a day to end his struggle of having to endure a life of pain and suffering.

January 2, 2012  he peacefully left this world with us by his side, holding him and showing him the love he deserved.